When I was a teenager, I drew a picture for my three major goals.  I honestly have not really thought about it very often since drawing it but decided it would be perfect for today.  My dreams really are coming true--one step at a time!!  And I honestly feel so blessed because together we really are
"Living Our Dream Life" (or at least I am...).

Dream 1: Graduate with my Bachelor's degree from BYU--check.
Dream 2: Marry my best friend in the Salt Lake Temple--check.  (Sidenote... if you will notice my handsome hubby even has on a green bow tie--check.)
And finally Dream 3: Be a Mommy--soon-to-be check. 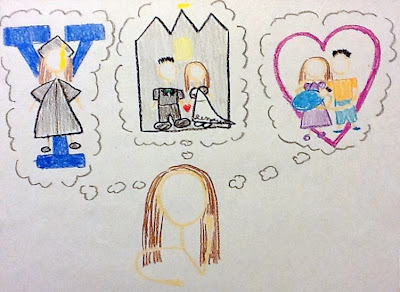 Now, if you will please look at our baby and the color of the blanket.  My dreams really are coming true--exactly.

P.S. My stick figure self portrait skills have an identity crisis.  I have no idea how to draw myself with short hair... LoL! :)
Posted 5:08 PM 2 comments:

Email ThisBlogThis!Share to TwitterShare to FacebookShare to Pinterest
The Themes of Dreams: Dream Life, Miracle in Progress

The Value of a Recipe

I have not written very many teaching experiences.  But I thought this one would get some laughs.

The goal for today was that students would understand why recipes are so important and all the different things a recipe requires.  I'm pretty sure I met my teaching goal and I highly doubt many of the students will forget the lesson.

I had everyone get out a piece of paper and write a recipe for a peanut butter sandwich.  Luckily, they are a good class and easily cooperated.  I gave them maybe 5 minutes or so do this.  During that time I went into the lab and got out all the ingredients I needed.  The students had no idea I was doing this because they were in the classroom.  I then came back in and once mostly everyone was finished, I had them put their pencils down and explained that if a pencil was picked up again, they were disqualified.  I then brought everything into the classroom.

One student comes up and reads his recipe exactly.  No changes or speaking clarification could be added--just the recipe as it was written.

Get out 2 slices of bread.  I struggle with the bread sack, was trying to rip it open but didn't want to actually destroy it, attempt the twist tie but that didn't work so I gave up.  The class groaned.

Put the knife in the peanut butter and put some on the bread.  I take the plastic knife and attempt to stab the jar with no success.  So I picked up the jar and placed it on the loaf of bread--since I didn't even have a slice out.  The class screamed--NO you're squishing the bread!!

Put the knife in the jelly and put some on the bread.  Basically the same thing from before.

We talked about the value of a recipe.  The class then told me that no recipes says untwist the bread sack, unscrew the lid, etc and that recipes assume you can do that.  I emphasized that assuming just got us to squished bread but agreed to try the recipe again.

Following the same recipe, the kid basically ended up with a bread sandwich.  I had no idea how much some was.  I told them that I met the requirements for the recipe.  Fortunately the kid was a good sport and was laughing.

So I try a different girl's recipe.

Get out two slices of bread.  Check.

Spread jam on the entire slice of bread.  Can you guess where this is going?  Yup, I literally spread jam on both sides of the bread and the crust.  My hand was sticky.  The class gasped at this because I was wasting food.  The girl thought she had the perfect recipe and about died when her slice of bread was completely covered.

Put bread together and clean up.  The peanut butter stayed up and well, there was jam everywhere.  I do have to say that I liked her cleaning instructions though!

At this point, I talked to them about specifics and clear instructions.  I emphasized that a good recipe should turn out the exact same time no matter who made it.

So I try making one last sandwich.

Spread 1 t. of Peanut Butter on one side of one piece of bread.  I used a spoon and used my best guess for how much 1 t. really was because I didn't want to go get the measuring spoons out in the other room.  But we were making progress with this recipe.

Spread 1 t. of Jelly on one side of the other piece of bread.  My students are catching on!

Form the sandwich by placing the peanut butter and jelly together.  So I placed it together but made it into an 8 pointed star rather than a normal square sandwich.

Then they had to look at various recipes that had purposefully had different parts missing and identify what was missing.  This is probably on my top favorite list of lessons I have taught because the students learned and we both enjoyed it.  And I doubt it will ever be forgotten.

Email ThisBlogThis!Share to TwitterShare to FacebookShare to Pinterest
The Themes of Dreams: Eyes of a Teacher

I have been thinking about all my goals and dreams for this new year.  And I have been trying to pick one word to summarize all of them.  Last year my one word goal was HEALTHY.  My whole life which in turn became our whole lives became healthy.

This year I wanted my one word goal to be BABY because it is an easy goal.  But I kept thinking about it and decided that BABY is something more a long the lines of a "to-do" list rather than a "to-be" list.  In many ways you can check off having a baby.  Go to doctors appointments--check.  Get baby stuff--check.  Baby showers--check.  Decorate a nursery, maternity clothes, go to the hospital.  Check, check, check.  So maybe BABY is not the best one word goal for 2012.

As I continued to keep debating my 2012 goal, I thought about the quote by Elder Lynn G. Robbins,


"Many of us create to do lists to remind us of the things we want to accomplish.  But people rarely have to be lists.  Why?  To do's are activities or events that can be checked off the list when done.  To be, however is never done.  You can't earn checkmarks with to be's."

I need something deeper, something that will help me become more Christlike and something to develop my character... a "to be" rather than a "to do."

After much contemplation I think I have finally decided my 2012 one word goal to be CHERISH.  I really think working on this word has the power to change my nature and guide me to following Christ even more.

CHERISH is defined as (1) to hold or treat as dear; to feel love for, (2) to care for tenderly; nurture, and (3) to cling fondly or inveterately to.