I have thought a lot about the Articles of Faith since posting earlier about the Articles of Faith Puzzles that I made to go in our Reverent Bags. I realized that although I probably used to know them at one point in time, I wasn't very confident on reciting them. Shoot. Forget reciting them, I wasn't even sure I knew what some of them talked about. {guilty look} I was determined to (re)memorize them all again because I want to be able to teach Baby Bunny. I can't teach him that which I don't know myself. And so, this Family Home Evening was created. FYI: I am falling in love with sugardoodle.net because the ideas generally came from their Articles of Faith page. I even adapted this lesson from there. :) And there are TONS of ideas--if you want to look for a different activity/ lesson/ etc!

Lesson Intro:  What are the Articles of Faith? Who wrote them? Why were they written? How are they important to us today? (This last question might be something to think about during the lesson and then come back to it at the end.)

At the request of Mr. Wentworth, I have written the following sketch of the rise, progress, persecution, and faith of the Latter-day Saints, of which I have the honor under God, of being the founder.  Mr Wentworth says that he wishes to furnish Mr. Bastow, a friend of his, who is writing the history of , with this document.

When I was fourteen I began to ponder religion.  I knew that all the churches couldn't be right, so I went to a grove of trees, and asked God which church was true.  He told me that none of them were, and that in the future I would know the fullness of the gospel.  A few years later an angel came and told me about the gold plates, and that I would be the one to translate them and bring the gospel back to the earth.

On the 6th of April, 1830, the "Church of Jesus Christ of Latter-day Saints" was first organized.  We as members of the church were treated very badly by people that didn't believe the same way we did.  We were driven from county to county, and state to state, and many of our people were sick and dying.  We
arrived in  in 1839, where we began to build Nauvoo, "our city beautiful".

Our missionaries are going forth to different nations, and the Standard of Truth has been erected; no unshallowed hand can stop the work from progressing; persecutions may raise, mobs may combine, armies may assemble, calumny may defame, but the truth of God will go forth boldly, nobly, and independent, till it has penetrated every continent, visited every climb, swept every country, and sounded in every ear, till the purpose of God shall be accomplished, and the Great Jehovah shall say the work is done.  (the articles of faith follow this)


Activity:  Play with the Article of Faith Puzzles. Could make it a race to see how fast you can work to get the pieces all together. Or give everyone their own card(s) and have them find all the pieces they need for their card then read each Article of Faith.

Challenge: Memorize all 13 Articles of Faith. I printed off some punch cards to keep track of the progress. (Note: I used the ones in the link--just edited them and took off the green background to save on color ink.) Then on the back of each of our punch we wrote down a reward. I would suggest that it be a non-food reward for each person individually. Examples: 13 minutes staying up later, 13 minutes of extra screen time/ video games, 13 minute massage, etc. Have everyone pick something that would be a reward to them to help keep them motivated to memorize. And then once everyone in the family has completed their cards then go out for ice cream.

Treats: We "Bee"lieve (pick a treat to make... or simply have something with honey...) 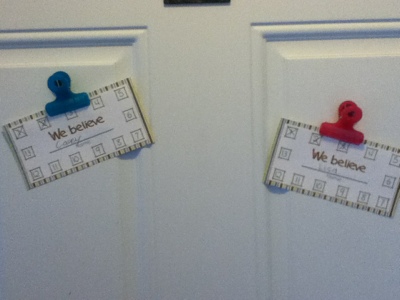 Email ThisBlogThis!Share to TwitterShare to FacebookShare to Pinterest
The Themes of Dreams: FHE Ideas