The Priesthood & a Band-Aid

I have thought a lot about an object lesson I heard once for teachers. I can't remember where I heard it... maybe a class... maybe pinterest. So the idea is not my own but I wanted to share.


Several people had various ailments, illnesses and injuries. They went to their doctor in hopes of a treatment. After seeing the doctor, they had to wait in the lobby until everyone had spoken with the doctor.
The first person had a cut on their left arm. The doctor cleaned the wound and put a Band-Aid on. The second person complained about not being able to see. The doctor cleaned the left arm and put a Band-Aid on. The next person had extreme knee pain. The doctor cleaned the left arm and put a Band-Aid on. One person had headaches, one had an upset stomach, and so on. The treatment was always the same--clean the left arm and put a Band-Aid on.
While waiting in the waiting room, it became apparent that only the first person was happy. Everyone else said the doctor was a waste of their time and money. The second person wanted glasses. The next person wanted knee shots (ha,ha... no one ever wants these... trust me!). And so on. No one could figure out how a Band-Aid on the left arm did anything to help them so they decided to all ask the doctor.
Demanding to see the doctor again, the patients wanted an answer. "Why?!" they inquired. "How does a dumb Band-Aid help me when I never said anything about my left arm?"
The doctor slowly replied, "I was treating everyone equally... the same."
"But that's not fair," came the response. "We want a treatment for our own, individual problems."
"The first person needed a wound cleaned on the left arm and a Band-Aid. I'm treating my patients equally by providing the exact same treatment for all."
"But that's not fair," came the response again.

So obviously, this would never happen. A doctor would not treat all patients the same. The doctor would treat them fairly, providing a solution to each person's individual condition. The point is there is a huge difference between being fair and being equal.

When I was a teacher (a lifetime ago), I was being completely fair by allowing modifications on assignments and tests for students with learning disabilities. Was it the same? No. But was the easier assignment fair? Yes because I considered the student's personal abilities. As more children join our home, some long distance down the road, will I treat them equally? Not likely. But will I try to be fair? Yes. Fair to the circumstance, the situation and the child individually.

This post could stop here and be a good story. A great lesson to understand the difference between fair and equal. But I have to explain the reasons behind why I keep pondering this analogy and what it means to me today. 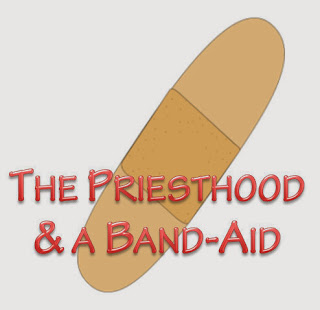 Thankfully, Heavenly Father does not treat us all equally. He considered us each personally as He gave us various talents and gifts. The world would be a mighty boring place if we were all the exact same with a Band-Aid on our left arm. But in His great wisdom and mercy, He gave me spiritual "knee shots" and someone else "glasses."

Even more than spiritual knee shots and glasses though, Heavenly Father lovingly created me to be a woman. It is not by chance. There was no toss of the coin or a 50/50 chance. No! It was on purpose. I am on purpose. I am meant to be a woman. And my husband is meant to be a man (a very cute and smart one, I might add). We complete each other and help one another. And I am so, SOOO grateful that Heavenly Father did not send us both down to earth with Band-Aids on our left arms. Where would that get us?! Likely nowhere because we didn't need the Band-Aid.

Instead, He sent me down to earth with Motherhood. This is a divine gift, my friends. It is sacred and something I cherish deeply. It is honorable. It is nurturing. It fills my soul with the deepest warmth and the purest joy.

And in His great wisdom, he sent Casey down with the Priesthood. This is a divine gift too! And it is sacred and something I also deeply cherish. It guides Casey and he blesses my life with it. But our gifts are not the same because we are not the same. We use both our gifts to bless our family. We use them together. We use them to complete one another. But our gifts are not meant to be the same!

Are we absolutely equal as partners? 100% yes. Both in our eyes and in the Lord's!! But are we equal in our roles on this earth? In our purpose? In our mission? NO! I am a woman. He is a man. I am not meant to hold the Priesthood because Heavenly Father didn't send me down to earth with a useless Band-Aid. He sent me down with so much more. So much more! And in His great love, He is being completely fair!

Email ThisBlogThis!Share to TwitterShare to FacebookShare to Pinterest
The Themes of Dreams: Building a Testimony, Mission Mommyhood