Four years ago today I married my best friend. Life was blissful and we were in love. <3

Or so we thought. But our love has only continued to grow, with a priceless increase today.

I have come to realize that this... 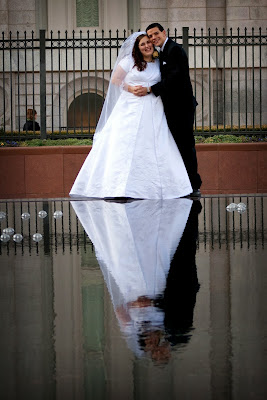 ...is not my marriage. It was my wedding. It was a very important day. It was done in the right place and by the right authority. But having a temple wedding is not enough. We have to work to have a celestial marriage.

Marriage is something you do day in and day out. It is staying up late with a sick kiddo. It is raking the leaves while it is beginning to snow. It is counting pennies three times in hopes they will stretch a little bit further. It is sacrificing your wants for the other person.

I have watched Casey sacrifice countless times for me. And I have done other things for him. But today I learned a huge lesson about sacrifice.

Money is ridiculously tight right now. Like uncomfortably so but our basic needs are being taken care of so we still feel so blessed. Blessed by our learning to live within a super strict budget and blessed abundantly by the generosity of others. Casey was in charge of planning our anniversary and he knew the budget. He would have to come up with something that had meaning and cost practically nothing.

I keep thinking about a quote by Pres. Monson that says: 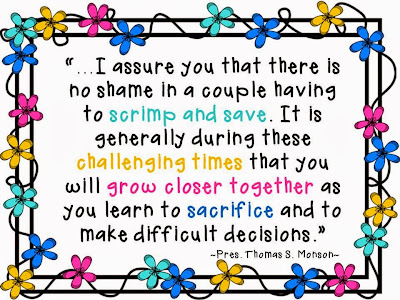 During the challenging times, we grow closer together. Today was no exception.

For the past week, Casey left clues on our whiteboard about our upcoming anniversary he planned. One clue told me that I should wear something fancy. Some I didn't understand at the time but just thought he was sweet. Yesterday he wrote something about heading to Scotland and today it was about Tommy and Fiona.

Um... who on are earth are Tommy and Fiona. Hello google. Apparently there is a play/ movie called Brigadoon (seriously... don't laugh... I have never heard of it before!) So next I started googling that to see if I could find if it was showing anywhere in the area. I was pleasantly surprised to find it is showing currently at a very nice theater not too far from our home.

My first thought was pure excitement. We haven't seen a play in a long time because it is way out of our budget. My second thought was hoping that Casey was given some tickets without my knowing so we wouldn't have to pay for it. But I decided to focus on the first thought and just look forward to the evening.

I instantly started texting Casey what I had figured out--my excitement bubbling through my fingers. And I also asked him to not buy me anything else because the tickets would be more than enough.

He knew his clue this morning would give it away and I would be googling as fast as I could type. But what I didn't know was his plan for the budget.

We each have a "piggy bank" in our budget. This is our free money that we can spend however we want. It just has to be recorded so the other person knows about it. The only money we have in our separate piggy banks right now is from our birthdays. Anything we had saved up prior was wiped clean to help pay for the furnace. Because money is so limited, it really makes our birthday money more special. It is our only piggy bank money.

Casey responded to my texts saying that he was paying for the tickets and wishing me a happy anniversary.

I knew as soon as I read it that he was going to use all of his precious birthday money to take me out on a date to celebrate my very favorite day of the year. I knew right then that I meant more to him than his piggy bank. I mean more than new clothes or toys or electronics.

And from his example, I lovingly learned about sacrifice. I re-learned about making marriage number one. I once again learned about growing closer together as we continue to scrimp and save.

Happy Anniversary My Love!
I look forward to an eternity more!

Email ThisBlogThis!Share to TwitterShare to FacebookShare to Pinterest
The Themes of Dreams: Eternal Newlyweds, Memorable Quotes, Strengthen Your Marriage

Love your blog - so creative :-) i just started blogging as well - please have a look at my blog www.yourssincerely.co.za and let me know what you think?