Last Saturday I decided to make Chinese food. After dinner, I noticed the fortune cookie on top of our microwave. Allow me just to say that this cookie has been sitting there for months.

As I read my fortune, the timing was perfect. Not that I really put much belief into random fortune cookies. But this one was like a little tender mercy. 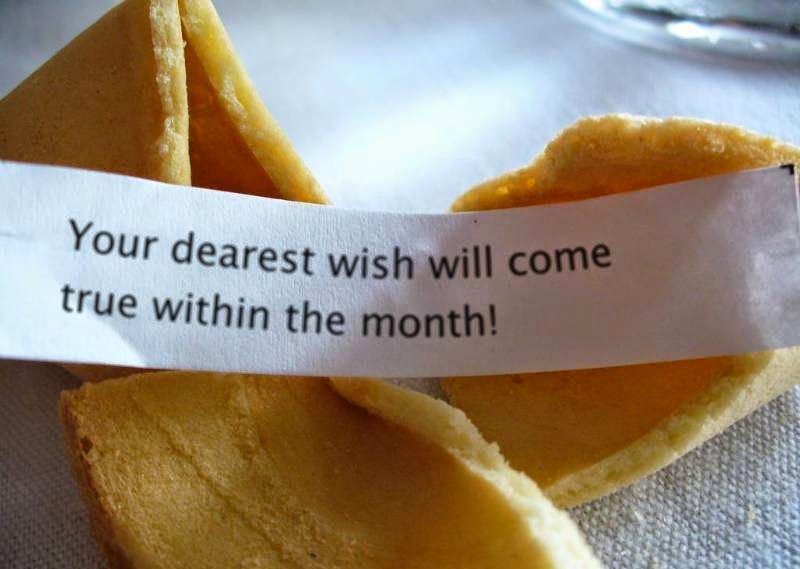 Allow me to explain my dearest wish.

Sometime near the beginning of this year, Casey's job cut out all overtime. I thought we were budgeting under so all of his overtime money could be saved. I thought wrong. All of the sudden, we had a giant budget cut. We were already living so simply, there wasn't anything else to cut out really. But his company promised that they would do performance reviews soon and promised a huge raise.

We kept waiting and praying for that raise. For some reason, we had our own definition of huge--enough to cover the overtime loss for starters. (And he wasn't working that many hours overtime!) Eventually the raise came and his company had their own definition of huge--50 cents. There was no way that this was going to continue to work. But Casey was right in the middle of the semester and didn't have time to think about dealing with a change.

When he initially accepted the job, we were thrilled because it was A JOB! I had already quit my job but Casey didn't have anything to replace it. And we were desperate. At the time of acceptance, we knew it was a very low paying job but it was his only offer. And any job was better than none. He was hired with the promise he could work as much overtime as he wanted and they would get performance cash bonuses every paycheck. (Both of these policies changed once his company was bought out.)

The semester ended with a 4.0 GPA (Congrats, Honey Bunny!!!). And we knew change had to happen. The change was not going to be a huge pay raise at his current job. So we started searching for new jobs. I would look for anything that I thought was even remotely related to his AS degree and a possible internship swap for his BS degree. I kept emailing him possibilities then he would sort through them as well as search himself and apply for everything that he was actually qualified for.

Sometime near the start of last week, Casey heard back from one of the applications he submitted and wanted to schedule an interview. That interview was one week ago yesterday. I wasn't holding my breath. Likely there would be several more interviews at various different companies--at least that has been our track record. He said the interview went so well and he they were impressed. We prayed.

The next morning (last Thursday), we know they emailed his references. That afternoon, he was trying to figure out where to email a follow-up thank you letter. During his searching and trying to remember all the names of people who interviewed him, he received an email from one of the supervisors requesting a second interview. Casey was excited and scheduled his second interview for Monday morning.

I ate the fortune cookie in between his first and second interviews.

All Monday morning, I am dying to hear how it went. He finally comes home with an answer to that fortune cookie. They offered him two jobs on the spot! I couldn't believe it! TWO jobs--they wanted Casey to choose which one he would like better. I know the fortune cookie is a little thing but it meant a lot to me. A reminder of Heavenly Father's love for us.

Yesterday Casey signed his acceptance letter and submitted his two weeks notice! Wahoo! We feel so blessed. So very, very blessed and grateful. And deeply loved by Heavenly Father. I know He really does hear an answer every prayer--sometimes it takes months of waiting with lessons to be learned in the process. But I know He is mindful of us.

We continue to pray that the next two weeks will transition smoothly. That somehow switching insurance and the timing of pay checks will work out miraculously. And I know that somehow it will--even if its not what we expect right now!

Email ThisBlogThis!Share to TwitterShare to FacebookShare to Pinterest
The Themes of Dreams: Job Hunting