I Was The Stranger

I was the stranger.
And I felt every sense of that word.
Let's rewind a bit first though. 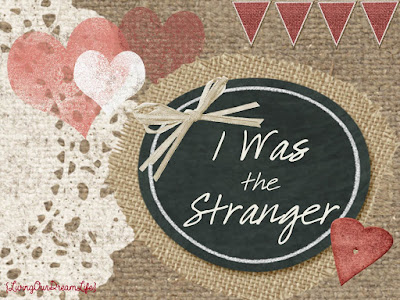 I sat all by myself for the broadcast. I was at our old stake center. It was extremely dark. I stood by the door awkwardly straining to try to find anyone I knew. I don't know if it was because very few people from my ward were at the broadcast or because the room was so dark that I couldn't find them. Likely some of both. I finally decided to sit near the back so someone would see me and come join me. It never happened and I sat by myself for the whole meeting. (And just a note... being by myself is not a terrible thing. I still had no children crawling all over my lap. I was able to concentrate.) However... Knowing that we were moving next Saturday, I already felt lonely. And sitting there made me feel so alone.

At this meeting the topic of "I Was A Stranger" and helping the refugees was introduced. A few things were mentioned about how to help the refugees. One that I remember was that they needed a friend. Now. Lets just be clear. In no way do I consider ourselves refugees. We are blessed beyond measure with a lovely house that is quite honestly pretty close to my dream house. Casey has a wonderful job. And we can afford to keep me home as a full time mommy. No. I'm definitely not in the same boat and can't even imagine. But... in that moment... the only thing I needed with the upcoming change was a friend.

That morning after sleeping so little the night before in our new house, I woke up crying. I felt so alone. Casey was at our old house trying to clean and finish up. The kids were asleep. And my body ached. I had absolutely no idea how I was going to lift a single box. I was completely drained from loading everything the day before. I was overwhelmed. Exhausted. Alone. And scared.

To say I was scared would be such an understatement. I was a stranger.

And then the whole army appeared. More people than I even can remember came to help us unload. We were able to park our cars in the garage that night because these strangers took us in instantly. They moved everything out of the garage and truck and into the correct rooms. Somehow, I'm honestly not sure how, they squished the couch down the stairs. Casey claimed it wouldn't fit. But somehow they wiggled it in and out of the rooms until it magically appeared in the family room. (And just for the record, it is a super great thing that the couch is nearly brand new. Because it is seriously never leaving that room!)

Later that night, blessings poured down from heaven. I was still a stranger.

A dear, dear sister showed up with dinner and salad and these amazing blondies. She thought that we might need a home cooked meal after moving. Words can't even express how much this meant to me. It was so much more than food. It was love and acceptance and comfort. We saved the food for the next day, Sunday, so we could have something to eat when we couldn't go out.

Two other sisters came and wanted to make sure that we had beds to sleep in and basic things unpacked. I was the stranger and they just came. Angels is what they were honestly.

Fast forward a week or two.
I was a struggling stranger.

The excitement and adrenaline of moving had finally worn off. Casey had gone back to work. Due to General Conference then Stake Conference, we still had not really gone to our ward. I was home with our Little Loves. And once again I was crying. With the timing of conferences, I was not making many friends because we were not attending "normal" church. And I felt alone. I prayed for someone to come to me. I had no idea who I could call for friendship. So I prayed.

Another day a sister called to invite me to go with her to RS.
I swear someone always sat by me in RS on Sundays.
Hugs.
Kind words.
Text messages.
Treats.
Personal play dates.
Dinner.

The other memorable experience was while I was sitting at a near by park for a mommy and me ward play date. The park is in walking distance to our home but is not within our ward boundaries. We were considering buying a house that was right by that park. While sitting there and chatting I mentioned that we had thought about a house up there. Without even missing a breath, the sweet sister right next me commented how grateful she was that we didn't buy the house near the park. I still felt vulnerable and outsider-ish. But. That day. That comment. Something changed.

I was accepted. I was loved. My kids were as well. We all were making friends. Friendships to literally last a lifetime because no one plans on moving out.

Four and a half months later.
August 15, 2016
The moving dust has settled. The boxes are far and few between. Our old insurance has finally canceled. (Ugh! Insurance....) Weeds have been pulled and air vents cleaned (granted both could probably use it again). Closets are filled. Furniture arranged. Homemade bread.

And truthfully... truthfully we are home. I can't explain it. I don't know what it is exactly. But somehow it just feels different than anywhere we have lived. We are home. Our ward is home. I was taken in. I was welcomed. I once was the stranger.

Email ThisBlogThis!Share to TwitterShare to FacebookShare to Pinterest
The Themes of Dreams: House Hunt