Meant to Stand Out

{I know it has been a very long time since I wrote. I keep feeling strongly that I need to start writing again. I need to use this as a way to share my testimony and hopefully help others strengthen theirs! I'm hoping to make this habit become a weekly occurrence going forward.}

While we were staying in Denver recently, one of the highlights at our motel was swimming. The other was breakfast. Both of my Little Loves had gigantic breakfasts. Muffins, waffles, hard boiled eggs, fruit, yogurt, toast, the list goes on. Literally every day we were there, each Little Love enjoyed multiple large plates of food.

(And the reason for eating a gigantic breakfast.... In Denver, you do one thing. You walk. Everywhere. You keep walking. Parking is ridiculous in downtown itself. We saw one place that charged for every TWELVE minutes you were there. The prices would end up way more than we budgeted for. So we parked outside of downtown, still paid for parking, and walked. Both Little Loves were troopers and we all enjoyed the vacation!)

Back to breakfast. One morning in the lobby, we saw a family sharing breakfast. The kids were well behaved. They were talking and eating quietly. The mom was helping to get various items from the breakfast bar. Their food looked exactly like what we were eating.

And yet this family stood out. They stood out in the breakfast lobby. They would stand out in a park, at a store, in a large crowd; no matter where they traveled they would always be noticed.

Out of respect to the family, I decided not to sneak a picture of them eating breakfast. The family was Amish. They were wearing the traditional clothing that is generally associated with an Amish community. To be fair, I honestly don't know much about the Amish community. But watching this family eat breakfast, I kept thinking about how they will always stand out no matter where they are.

That thought of standing out, really caused me to reflect. Do I stand out? Do others look at me and know that I live my religion? Do I act different, look different, choose to be different from others I see around me?

One obvious answer would be yes. While we were in Denver, it seemed that e.v.e.r.y. single person that we saw during our walking expeditions appeared in one of two ways... likely both! Most people we saw had tattoos on their arms (or other visible places but generally arms) and almost everyone wore a tank top and short shorts. Don't get me wrong, it was HOT. And I'm sure walking made it even hotter. But there was a very noticeable difference in my appearance and those we met exploring.


Ye are the salt of the earth: but if the salt have lost his savour, wherewith shall it be salted? it is thenceforth good for nothing, but to be cast out, and to be trodden under foot of men.

The stronger my testimony becomes, the more I realize that I am meant to be different. Salt is very different from all other substances on earth. Salt is a substance used to preserve food. In my case though, salt is a substance use to preserve life. My baptismal and temple covenants keep me safe. Those covenants preserve my life. Salt is also something that everyone has and uses on a regular basis. My hope is that as I live worthy of my covenants, others will see something different in me and want to change themselves. I hope I can teach my Little Loves to be the salt where ever they go... at school... in primary... in our family. I want to fill the world with salt. And it starts by filling my own little world, one salt granule at a time. 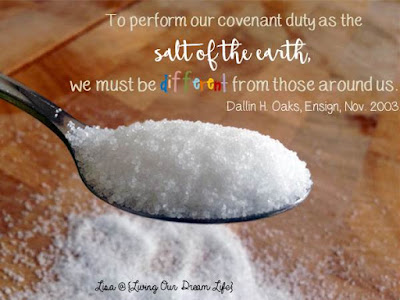